It has recently come to my attention that my status as a nerd may be in question. Apparently, according to some of my fellow humans, my inherent female-ness exempts me from certifiable nerddom. 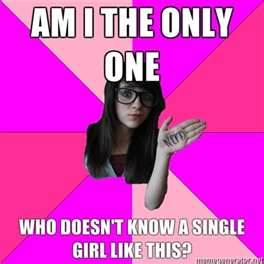 “Fake nerd girls” have earned their own meme for becoming so problematic.

Where were these authority figures while I was withering away in nerdy, socially-awkward seventh-grade misery? Where were they in high school while I was desperately trying to prove I wasn’t a nerd, to tell me I had nothing to worry about because it wasn’t physically possible for me to be one anyways?

I suppose I should be celebrating my newfound freedom, running towards the welcoming embrace of the cool kids with arms outstretched. But, as it happens, I’ve grown rather attached to the label. So, in solidarity with the ladies featured on a recent music video by “The Doubleclicks,” I hereby present a selection of my Nerd Credentials in order…